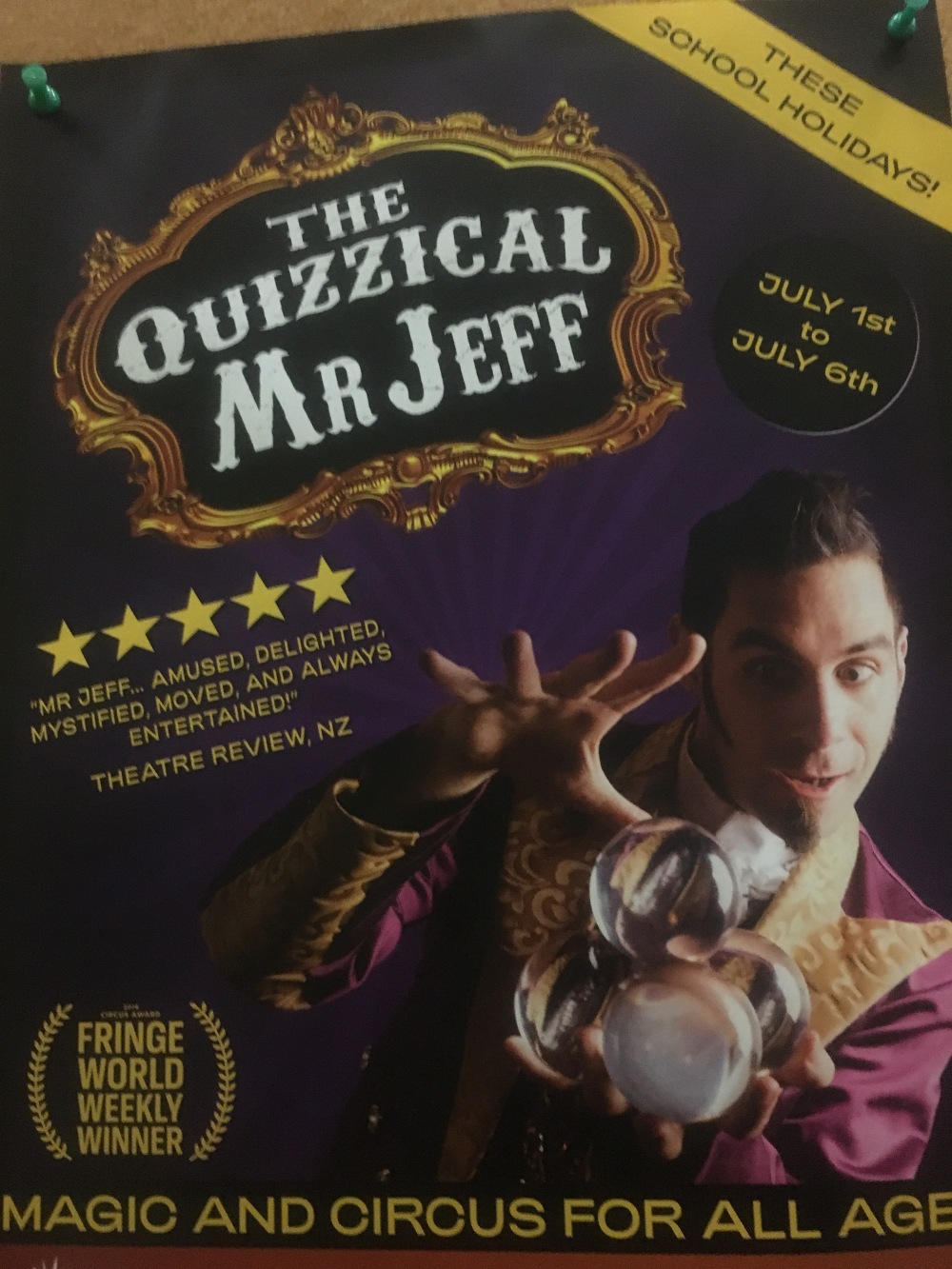 One thing I love about the Melbourne Magic Festival is the wide array of styles and interpretations of magic that are presented. Prior to watching “The Quizzical Mr Jeff” I’d heard nothing but praise and wonderful comments so I was eager to see what all the fuss was about!

On stage, Mr Jeff had an eclectic assortment of curious props: a globe of the world; a fancy hat stand (with fancy hats) and other items shrouded in mystery. Upbeat Euoropean style cabaret music was playing on entry to set the mood of the show, and made for a whimsical soundtrack. Mr Jeff himself is quite dashing and debonair and throughout the show you will find out exactly how talented he is too! Whilst many of the aspects of this show are circus based, much of it is magical – Mr Jeff balances things that look like they shouldn’t be balanced, and in other portions of the show various items are levitated in superb ways. Mr Jeff himself is silent most of the time during his show, save for some cries / prompts for the audience to make some noise. It’s so fun to be in the audience for this show as each response to Mr Jeff makes you feel like part of the story and magic too.

Show highlights for me are Mr Jeff’s contact juggling of clear spheres (Labyrinth movie fans eat your heart out!!) – this portion of the show was sublime and I was completely transfixed (as were other members of the audience). Another highlight was possibly the largest latex balloon I’ve ever seen on stage (a six foot tall balloon)! What Mr Jeff does with that balloon needs to be seen to be believed!!!! It was incredible, heartfelt and exciting all at once – the screams and cheers of the crowd were testament to that.

Mr Jeff has put an immense amount of skill and effort into each performance. I left the theatre feeling inspired and like I’d been to another world. I honestly can’t recommend this show enough – it’s unmissable!

VERDICT: A thoroughly entertaining show and impressive show from start to finish. Let Mr Jeff be your guide on a wonderous journey of circus and magical delights. This has been the best daytime show I’ve seen so far in the festival so I recommend all to see it, it’s a perfect show for the family to enjoy together!

*Disclaimer: I attended this performance as a guest of the festival