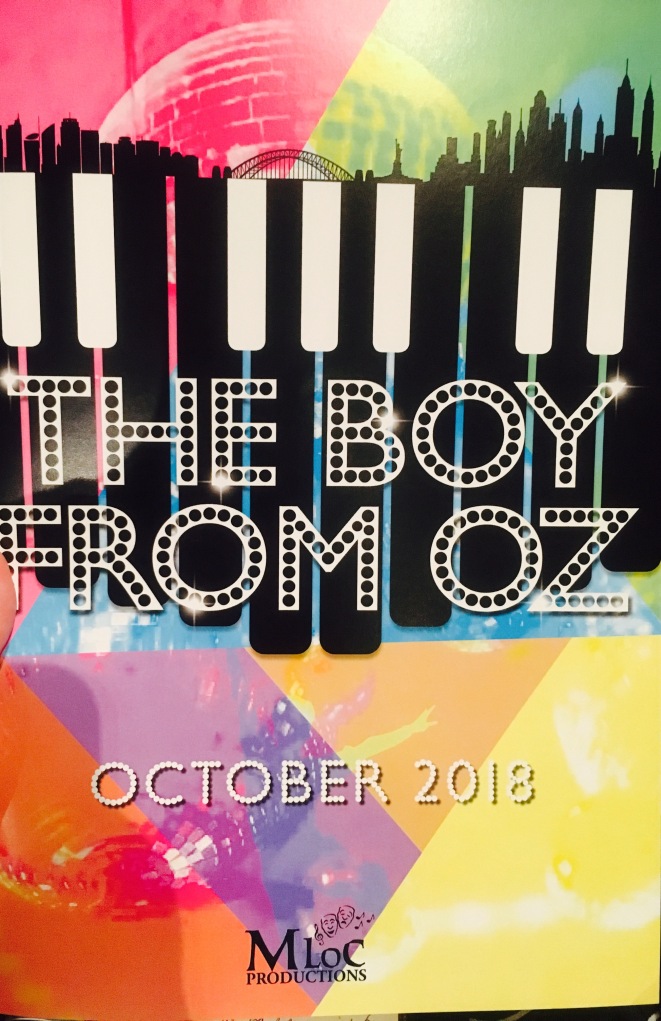 On a gloriously warm Spring afternoon, I ventured bayside to the pleasant suburb of Parkdale to visit the local Shirley Burke theatre. This modern theatre is a jewel in Parkdale – with a welcoming foyer, comfortable seats, neat theatre layout and an abundant number of friendly staff on hand to help visitors. On this occasion, I attended the Shirley Burke theatre for the local theatrical group MLOC Productions’ opening weekend of “The Boy From Oz”. For those of you unaware, “The Boy From Oz” chronicles the story of the Australian musical icon Peter Allen- his trials, tribulations and rise to fame.

The show set a fairly fast pace  – but not too fast, so that the audience could keep up with the storyline and the ever growing cast of character appearing in Peter Allen’s life. At regular intervals between songs, lead Matt Jakowenko (Peter Allen) would keep the show moving along by addressing the audience and eliciting many responses and laughs in the process. On that note, all of the comments and one liners from Matt Jakowenko meant that this production is quite interactive. Sitting silently won’t win you any favours from “The Boy from Oz”! With a gleaming smile, smooth hair and fabulous outfits, Jakowenko easily had the audience captivated each time he was on stage. Other standout leads include Saskia Penn (Judy Garland) whose vocal solos commanded silence from the audience; Hallie Goodman (Liza Minnelli) who made many a Minnelli fan swoon with her likeness and charm; and Wendy Alberni (Marion Woolnough) who I’m sure many in the audience could relate to, with her encouraging tones and witty comments. Ben Howell (young Peter) impressed with his smile and his easy presence onstage, along with his clear musical theatre talents. I’m sure we will all see his name in lights one day! A special mention also goes to Peter Allen’s trio of singers, who helped keep Peter ‘on track’ and even sung a few songs themselves with an impressive vocal range. Indeed, throughout the production I couldn’t fault the vocal talents of the cast – everyone sang so well.

Having viewed (and reviewed) several Peter Allen tribute  / cabaret shows previously, I was excited to see this theatrical production and I wasn’t disappointed! It’s truly a joyous and vibrant spectacle of show, which had the audience clapping and cheering along at every turn. The eyes and smiles of each cast member (and especially those within the ensemble) were as shiny and glittery as each sequin worn on their many outfits. There were so many costume changes for the leads and ensemble members that I think some magic really is weaved backstage – the amount of costume changes is mind boggling and a testament to the levels of dedication and skill to all cast members involved in the production. I also enjoyed the varied range of ages within the cast members, ranging from those of high school ages right up to performers who I’m sure have ‘tread the boards’ for a number of years. This greatly enhanced the storyline and production, as Peter Allen would have mixed with a wide variety of people throughout his life.

The principal team behind this production – Director / Choreographer Rhylee Nowell, Musical Director Matthew Hadgraft and Production Manager Andrew Gyopar – head a ‘conga line’ of wonderfully talented cast members and their own dedication to the show can clearly be seen on stage. Whether it be the clever set design and glittering wardrobe of costumes, the multiple choreographed dance sequences by the cast, or the dialogue and story progression from the lead cast members that makes the show more than a back catalogue of Peter Allen songs, I can only imagine how many hours of sweat and rehearsals went into a production such as this. It’s a production that from the outset looks like a neat package which then bursts open with an array of colour and surprise as soon as the curtains open.

I felt so uplifted by the end of the performance, and almost lost my voice with the amount of cheering and whooping I was doing (always a good sign of a great show!). On the way out of the theatre I overheard many audience members commenting on the high quality of the production and the fun night out that we were all privileged to share.

VERDICT: A joyous and vibrant production that will have you clapping and chanting along. Never a dull moment with this show, which has such high production values I’m questioning why it isn’t showing in the larger theatres of Melbourne. I highly encourage you visit this jewel of a show during its limited run in Parkdale. I can only hope this production tours so many more are able to see it.

*Disclaimer: I attended this production as a guest of the show Director.