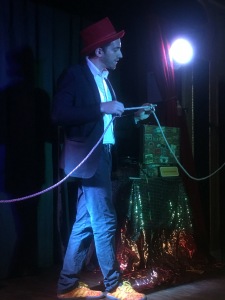 On a lazy Sunday afternoon in May, a good friend and I decided that we did not want another weekend to pass us by without going out and enjoying some magic. We arrived in the city at Speakeasy HQ, to be warmly welcomed by the host with the most – Roy Maloy. Roy opened the show with some of his very clever balloon twisting. This twisting isn’t quite like the usual balloon twisting you may have seen, and Roy’s creations come with a great story. If you haven’t seen Roy show off his ballooning talents, then I encourage you to see him in action someday soon! This was, of course, to get the audience warmed up an excited for an afternoon of magic.

David Key appeared onstage in a fine outfit, including his iconic red hat and special sneakers to a loud round of applause. The audience members looked intrigued and keen to see what magical feats David had in store for us all. David commenced his act with some smooth rope magic, accompanied by a beautiful story. This intrigued me and suddenly I was transfixed by David and his magical talents! As with many magic shows, the audience do not get away without some chances to help out the magician. There were no shortages of opportunities to help David with some of his magic and with each audience helper throughout the show, David had a very friendly manner. Indeed, David is probably one of the friendlies magicians I have ever seen (and met) and he certainly uses this to cast a spell over his audiences. Magic with money, rope and cards featured in this very charming show. Audible gasps were regularly heard in the audience so it is clear David is an accomplished magician and impressed the audience. 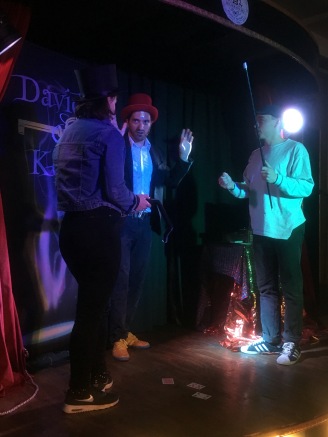 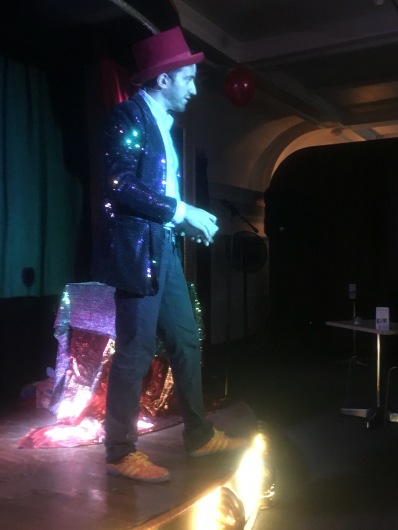 Interval time at Speakeasy HQ is a fine time to grab a drink, or in my friend’s case to grab a tasty snack from the bar menu. After the interval, David reappeared onstage in a new outfit featuring a fabulous sparkly jacket. The tone of the show changed a little – things were running at a slower pace. Promptly, the audience discovered why – a lucky audience member was about to play a game of ‘Russian Roulette’ with David! During the ‘Russian Roulette’ routine, I heard many more gasps and cries of ‘AHHH!’ from the audience. You could cut the tension in the room with a knife. Nevertheless, I find this routine enjoyable – it excites me! If you haven’t seen a magical version of ‘Russian Roulette’ then come and see David Key! Nearing the end of the show, David performed some fast object productions before a sweet finale. The kind of finale that stays with you long after you see the show. 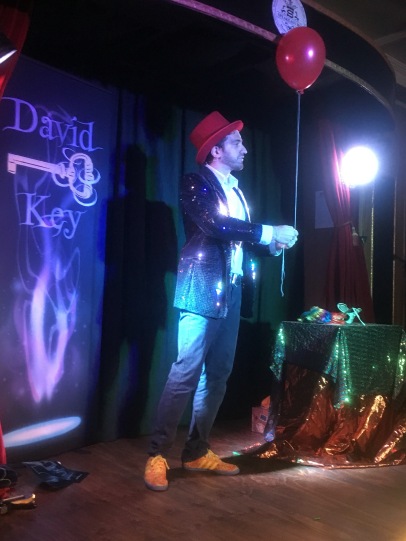 After the show, the audience had the chance to meet David. This was nice to see as many people (and performers) have busy lives so to get the opportunity to meet a performer post show is special. This show was exciting and full of surprises. My friend and I left the theatre feeling happy and as though we’d had a perfect afternoon.We’d laughed, gasped and felt so lucky to have seen such an enjoyable and surprising show.

Verdict: definitely an enjoyable show. David Key’s magic (and his personality) make for a fantastic and surprising show. I literally had no idea what to expect next! If you have the chance to see this show, I recommend it.

*I attended this show as a guest of Speakeasy HQ.

Tickets: I saw this show at Speakeasy HQ. I believe the current run for ‘Incantato’ at this venue has come to a close, however there are a variety of other shows on. Check out the website: http://www.speakeasy-hq.com/

David will be performing ‘Incantato’ at The Melbourne Magic Festival, held at the Northcote Town Hall. Tickets and more information can be found at:
http://melbournemagicfestival.com/speaker/incantato/