Early in May, I gathered a bunch of friends and we made our way to The 86 to watch another monthly installment of Top Hat Tuesdays. The May show was hosted by a charming, suave American performer – Tim Motley. Tim opened the show with plenty of jokes, and a card trick with an audience member. Tim proved he has plenty of rapport with the audience.

The first magician to grace the stage this evening was a young magician by the name of LJ. LJ the magician presented a clever and amusing chef themed performance, which the audience lapped up. LJ certainly knows how to make the audience laugh, and had some great one liners. Aside from the magic LJ also presented one of his fantastic escapes, enlisting the assistance of some lucky audience members. Speaking to some audience members at interval, we were all very impressed with this young Melbourne magician. If you get the chance to see LJ the magician at an event, I certainly recommend it. You should see what he gets up to with a roll of glad wrap!

Next on stage in the show was one third of the highly acclaimed magical group ‘Gentlemen of Deceit’ – Vyom Sharma. Vyom gave one lucky audience member the chance to experience some special ‘pure magic’ which happened in front of her very eyes. As someone who sees quite a lot of magic, it was great to see an audience member in such a moment of wonder. As I tend to get absorbed into magic when I witness it happening on stage, it was a lovely moment to take a step back and focus on a single audience member having a personal magic moment. Much of the magic Vyom included in his set was designed to make the audience question their own mind, with predictions and mysteries galore. I especially enjoyed Vyom’s money magic (with the money disappearing and appearing in other places).

Tim Motley then reappeared with some entertaining mind reading and handwriting analysis, before introducing the next act – the energetic and talented Raymond Truong. I have been fortunate enough to see Raymond Truong perform many times, but for those who haven’t his acts are full of fantastic physical comedy, mime stunts and card manipulations. During this show, Raymond also involved some audience members in a hilarious ‘coin and bucket’ routine which had the audience laughing and cheering. You can’t help but laugh and smile during Raymond’s performances, as he brings an extra dimension to magic and has expertly timed physical comedy.

The headline act for the May show was a very popular magician in the Melbourne magic scene…in fact if you have seen magic in Melbourne it is a good chance it was the spellbinding magic of Anthony DeMasi! Anthony’s shows are never complete without his menagerie of bunny and dove friends. A friend of mine on my table was handed a bunny in a hat to cuddle, which elicited many coo’s and gentle squealing from all on the table. Anthony is so kind to let audience members mind and pat his rabbits while we all enjoy his magic. Anthony’s performances often end up being madcap journeys into the world of magic, and this performance was no different. Many moments of wonder were created through Anthony’s magic with serviettes, rope, cards and plenty of gags. This style of magic (and great use of the stage space) gives a surreal aspect to the performance. Anthony’s magic takes me to another place, so if you ever get a chance to see him perform please take that opportunity! 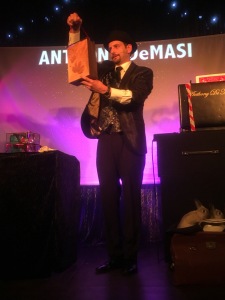 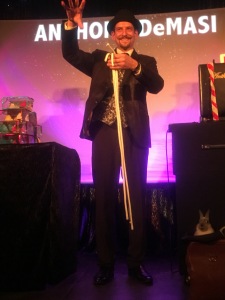 After the show, my friends and I were all buzzing  – we’d seen some fantastic magic, laughed until our sides hurt and even had the chance to do some bunny cuddling. What more could you want during a magic show?

VERDICT: The standard of shows at Top Hat Tuesday remains high and with the lineup changing every month, there’s plenty of variety and fun to be had for regular and new audience members alike.

*Disclaimer: while I do assist the Top Hat Tuesdays team with marketing and audience management, I continue to support the show and pay for my own ticket.