IMPORTANT NOTE: The show I reviewed focused on sensitive subject matter- the sexual abuse of young boys by members of the Catholic Church. Consider this a trigger warning – if you’re sensitive to this topic, DO NOT READ ON. LEAVE NOW!

It was a dark night that I attended this satirical show, as dark as the subject matter itself that Frank Hampster was about to delve into. An intimate, but interested group of people had gathered to watch and listen to Frank Hampster’s accounts of growing up in Ballarat in the 70’s and 80’s. For those unaware, Ballarat is a region of Victoria with a notorious history of hosting many members of the Catholic Church who have sexually abused children. Frank was dressed in black and took to the stage, eyeing his audience with some mild suspicion. I stood out in the audience, with my pen and paper (for reviewing) and Frank asked who I was writing for  – concerned that I was attending on behalf of some lawyers (or perhaps that I was a lawyer myself?). Oh, how that made me laugh! 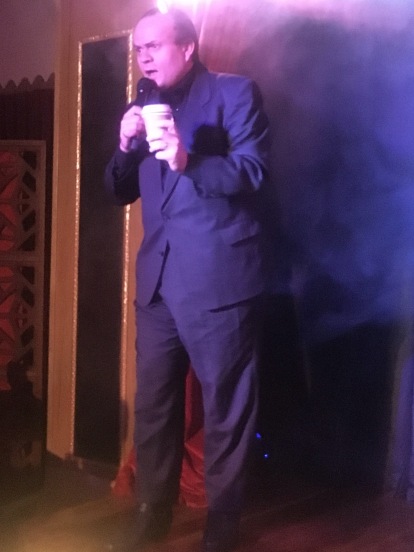 After some reassuring from the audience (and host), Frank went on to speak about some colourful stories of his time on day trips with priests, and some theories on why he believed priests (and other members of the church hierarchy) ‘got to be that way’. Frank mentioned that priests (and the church itself) are all about patriarchy, power and maintaining power, and this was a theme that coursed through all the contents of the evening. A quote I particularly liked was when Frank likened church abuse deniers to climate change deniers. Quite poignant in these times.

Throughout the evening, Frank was Frank by name, frank by nature which was refreshing given the subject matter. Due to ongoing court cases and events, Frank couldn’t name all the priests and divulge all the details he wanted to and reverted to pseudonyms for some of the stories and anecdotes. Nevertheless, this did not detract from a compelling evening. There wasn’t a dull moment between Frank pacing about the stage staring down audience members, to him singing a song based on the responses of priests’ to allegations in court (which was well put together).

The ending of the show held a few surprises, and the audience was treated to a Q and A session with Frank after the show which I think was a great way for people to find out more. For those who are asking why a person would make light of this (especially as an abuse survivor), Frank mentions “you gotta make people laugh, or they’ll line up and kill you”.

VERDICT: This show was eye opening, and confronting at times but some of the best shows are. Highlighting this subject matter and having an abuse survivor speak about it is the opposite to the past actions people have heard about – the covering up of documents and destroying of evidence by the Church. Sure, this show isn’t for everyone (hence my ‘trigger warning’) however for me it was a glimpse into another world and a reminder for me to be grateful for my own life and experiences within it.

Tickets: Next show is on Thursday September 15th at Speakeasy HQ. See more details at
http://speakeasy-hq.com/

Disclaimer: I attended this event as a guest of Speakeasy HQ.