In Australia, there is a TV program airing nationally, called “Zumbo’s Just Desserts”. This program features acclaimed baker of delicious sweets, Adriano Zumbo, and a group of aspiring bakers / pastry chefs etc that must emulate his creations and take part in challenges. 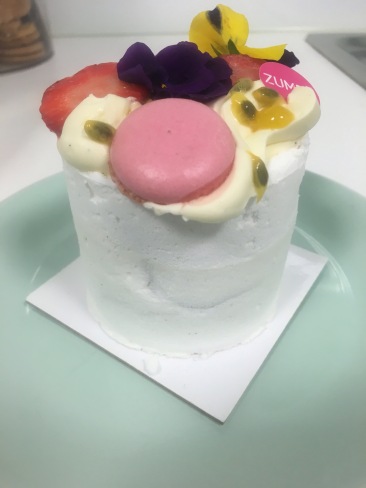 I must admit that I marvelled at how this creation was constructed. As I sliced the cake in half to reveal all the glorious layers, I was impressed how everything was held together in a delicate meringue shell. I did share a portion of this cake with a work colleague, but then the rest of the cake became unstable so I promptly devoured the remainder. Each layer tasted as it should – the chocolate brownie was rich, the lemon tart had a tang, the pavlova layer was sublime- however the doughnut layer was the weakest (taste wise). It did taste like a donut, but the texture and placement didn’t match the rest of cake. I would have preferred a ‘wagon wheel’ type layer with jam and marshmallow…or even an ‘iced vovo’ inspired layer. 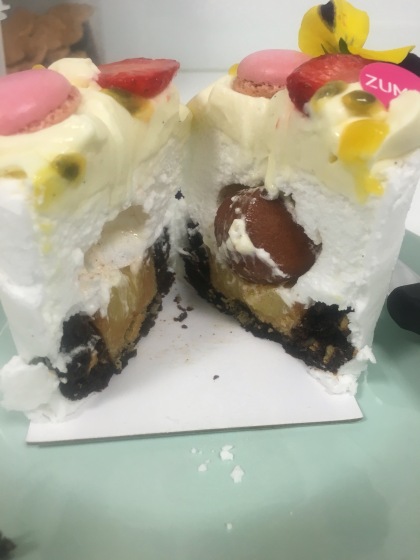 Even though the cake was small(ish) once my belly was full of cake, it felt like I had eaten 4 cakes in one. I was full for the entire morning and only had a small lunch that day. It was the highlight of my day. Fifteen minutes after purchase, the layered cake was out of my life, as quickly as it had entered.

Over a week later, and I’m still telling all manner of friends and people about this cake. I wish more people had the chance to experience and enjoy it.