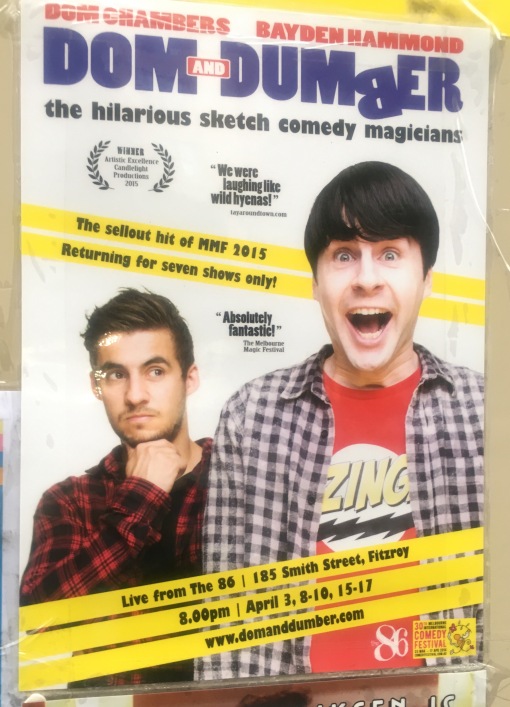 On a dark Sunday night, I ventured out to The 86 bar in trendy Smith Street Fitzroy to watch a sketch comedy / magic show as part of the Melbourne Comedy Festival. The show is called ‘Dom and Dumber’ and stars a pair of magicians – Dom Chambers and Bayden Hammond. As we took our seats and waited for the show to begin, upbeat music started pumping to get the (young) crowd in the mood for a fun show.

The show is a compilation of comedy sketches, with some classic magic routines weaved in. Except that the classic magic routines are all given a modern twist to match the whacky scenarios they have been placed in. Plenty of stunts were performed with magical flair, and audience participation just added to the hilarity of the evening. Nothing is taboo or sacred in this show – relationships, dating, religion and politics are all featured at one point or another. In fact, magic and comedy took us to so many places over the course of an hour! The comedy sketches also contained plenty of modern / contemporary references, which perfectly suited the audience. Dom and Bayden performed flawless magic teemed with some hilarious facial expressions-demonstrating they are skilled entertainers (and magicians!). The audience often burst into rounds of applause and laughter so ‘Dom and Dumber’ were doing a great job.

From the sublime to the ridiculous – you’ll find it all within the magical sketch comedy of Dom and Dumber.

Verdict: a great way to blend magic and sketch comedy. If you’re a fan of either genre, you’ll certainly enjoy this show.

*Extra notes: I attended this show as a guest of ‘Dom and Dumber’
A ‘no photography’ request was in place, hence no photos for this blog. A photo of the flyer will have to do!