It has been a few weeks since I went out to see some live entertainment. I manage events for my day job, and during February there were 13 events to manage so I was kept busy (and sadly, away from regular night time entertainment). All that changed on the first of March when I headed down to eclectic Smith Street in Fitzroy for another installment of Top Hat Tuesdays!

The March show was hosted by crowd favourite Nick Kesidis, who looked dapper in his new red suit. In fact, there were times during the show when I thought I was watching a fashion show – everyone looked so neat and smart. Nick had plenty of fun stories to tell and moments of witty banter with the audience. Involving the entire audience in his routine, Nick wowed us all by magically transporting cards (with some special helpers of course!). I enjoy how at ease Nick is with his audience and helpers, it just draws the audience into his world of magic and trickery.

Dom Chambers appeared next, and was a last minute entry in the show (as another performer on the bill was ill). It was impressive that Dom was able to show the audience some amazing magic, with an impromptu routine created from magical items found in his car. Classic magical effects were performed with balls and cards, and Dom even had a special guest that helped find a card chosen by a member of the audience. Dom remained witty and relaxed with the audience, despite what I’m sure could have been a stressful moment considering he was thrust onto the stage with no time to spare!

The last performer prior to interval was Nicholas J Johnson who is known as ‘Australia’s Honest Con Man’, however he is also a fantastic magician and a science educator! To top all that off, he’s friendly and does not look like one of those typical shady con artists that people read about. Nicholas presented a game of liars, where audience members had to fool him. I think this game would be intimidating to play against someone so skilled, however Nicholas ensured that plenty of laughs were had. I enjoyed that his performance seemed like a fusion of psychology and magic. Nicholas was lucky to enlist an audience member who ended up being a bonus ‘go go’ dancer of sorts, which added to the comedy of the evening.

After interval, the show continued with some European flair. Italian magician David Key appeared and looked the part – with his shimmery jacket and playing card belt buckle.  David is so exciteable and has a personality that just draws you into his act. He warmly engaged the crowd and shared plenty of jokes with his magical assistants from the audience. David’s performance was spellbinding and fascinating, especially when invisible cards became real and silk magic was performed by a volunteer. By the end of his performance, the audience was certainly taken to another world. 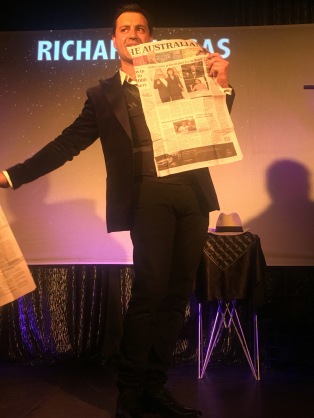 The headliner for the evening was one of the stars of the show ‘Paris Underground’ – Richard Vegas! Richard was dapper, suave and even gave some saucy winks to the audience which was met with some swooning from female audience members. Richard performed classic magical effects with silks, a newspaper and the famous linking rings. In fact, his performance of the linking rings was mesmerising – it was almost like a beautiful dance at times. The magic was set to European music, and towards the end of Richard’s performance I could have sworn that I was transported to a European cabaret. He is skilled at taking the audience with him into his realm of magic and intrigue. Richard definitely left the best til last, and I definitely wanted to see more.

I left Top Hat Tuesdays feeling uplifted – I had seen some incredible magic, caught up with some lovely friends and even made some new friends over the course of the evening. I can’t wait to see what my next experience at Top Hat Tuesdays will hold.

For more information, please visit the Top Hat Tuesdays website (link is below). At $15 a ticket, the show is reasonably priced and a fun night out.
Website: https://tophattuesdays.com/

*Disclaimer: I do voluntarily help out the Top Hat Tuesday team with marketing and audience management activities, however I still pay for my ticket so I feel comfortable to review the show.